Ministry of Skill Development & Entrepreneurship (MSDE) through its International Cooperation Division, National Skill Development Corporation (NSDC), Directorate General of Training (DGT) and other implementing organizations in coordination with the Ministry of External Affairs (MEA) works to facilitate the supply of a skilled Indian workforce abroad through harmonization of skill qualifications, mutual recognition of certificates, accreditation of training providers, etc.

II. Bilateral Engagements and Collaborations between on Skill Development

b) Business to Business (B2B) MoUs:

b) Agreement between NSDCI and Perdaman Global Services (PGS): This Agreement aims to provide a conducive platform for “Promoting International Workforce Mobility (IWM) of Skilled and Certified Indian Nationals to Australia. In June 2022 a mandate of 100 Nos (Drill fitter 5, HD Fitters 54, Chef 6, MC Truck Drivers 25, Machinists 10) as a pilot, Further, PGS has shared the demand projection of 620 Nos and a live mandate of 80 Nos (various sectors). Recently, the partnership between NSDCI and PGS was officially launched on October 28th, 2022, in presence of the Hon’ble premier of Western Australia and senior officials from MSDE and NSDCI. Along with the launch, the delegation also participated in a discussion with the Hon’ble Premier of Western Australia. The objective of the delegation was to position NSDCI as a preferred partner for hiring skilled and certified workforce from India to Australia along with the creation of enabling ecosystem for skill and education.

Hon’ble Prime Minister of India and the German Chancellor Markel signed a Memorandum of Understanding (MoU) in November, 2014 for bilateral cooperation on Vocational Education and Training (VET). Consequent to transfer of two verticals of Directorate General of Training (DGT) to Ministry of Skill Development and Entrepreneurship (MSDE), a new MoU was signed on 5th October, 2015 for cooperation in the area of skill development and vocational education and training between MSDE and Federal Ministry of Education and Research (BMBF) and Federal Ministry of Economic Cooperation and Development (BMZ).

On expiry of this MoU, a new version of this MoU as Joint Declaration of Intent (JDoI) between MSDE and BMBF and BMZ was signed on 1st November 2019 in New Delhi valid till 31st October 2023. The JDoI focuses on cooperation in the field of Skill Development and VET, Dual apprenticeships and workplace-based skill development, Capacity Building including Competency based curricula, Training of VET cluster managers, renewable energy, e-mobility, energy efficiency etc.

Present engagements with Germany: Brief on projects under various agreements signed with BMZ/ BMBF/GIZ agreements are as following:

1. Indo German Vocational Education Training (IGVET II) - The overall objective of the project is bring all the actors from public and private sectors work together to create conditions conducive to improving cooperative vocational training in India.

2. BMBF Project: SINADE- BMBF has funded a complementary project on strengthening company models of dual VET in industrial clusters in Northern India through a bottom-up approach (SINADE). The aim of the project is to develop a corporate blueprint for dual vocational training that can be deployed to other clusters later on.

3. IGnITE (Indo- German Initiative for Technical Education) project – This skill development project is run by the GIZ and Siemens India, in coordination with DGT under the aegis of MSDE This program provides support to selected Government ITI’s in 5 selected trades – Electrician, Electronics Mechanic, Fitter, Turner and Machinist. The program is focused on strengthening the capacity of the ITI ecosystem by providing the following trainings in the blended-online mode.

4. BMBF Project QualIndia - BMBF is funding a research project called ‘QualIndia- Quality Analysis in Indian Vocational Education and Training Institutions, with a focus on Industrial Training Institutions and Polytechnic Colleges’. The basic objective of the project is to develop and provide a demand-oriented quality model that is explicitly adapted to the Indian context and will be operationalized and tested in practice. The main goal of the project is to develop a demand-oriented quality model adapted to the national context with focus on ITI’s and Polytechnic Colleges in two pilot regions (Delhi and Bangalore). The project is conducted in cooperation with four Indian universities (IIMB, JNU, NIEPA; IGNOU).

5. iMOVE and German training providers activities- New Skilled Immigration Act in Germany (March 2020) is also focusing on skilled people with a vocational qualification and even on young people who are searching an apprenticeship in Germany (max. age is 25, B2 level in German language). German training providers are offering preparation and bridging course (e.g. transport and logistics, hospitality and tourism, agriculture and crafts).

TITP first commenced in 1993 in Japan, aiming to promote international cooperation with the aim of transferring professional skills to young and middle-aged youths of developing countries. TITP in India was officially launched from October 2017 as per the Memorandum of Cooperation (MoC) signed between the Ministry of Skill Development and Entrepreneurship (MSDE) and the Ministry of Justice, the Ministry of Foreign Affairs and the Ministry of Health, Labour and Welfare of Japan (Ministry of Japan). Under this project, NSDC has been designated by MSDE, as the “Monitoring Agency” to monitor and oversee TITP execution in India.

A total 424 technical interns have been sent to Japan through Sending Organizations (SOs) empaneled by NSDC in diverse sectors, including Manufacturing, Healthcare, Construction, Textile, Agriculture, and Food manufacturing. Further, an additional 738 candidates are currently being trained by Indian Sending Organizations to be sent to Japan under TITP. 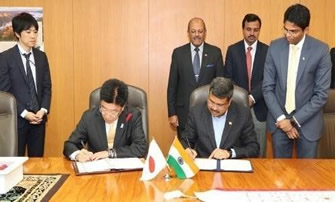 MSDE and the Government of Japan, signed a Memorandum of Cooperation (MoC) in Japan in October 2017 to allow the participation of Indian youth under TITP 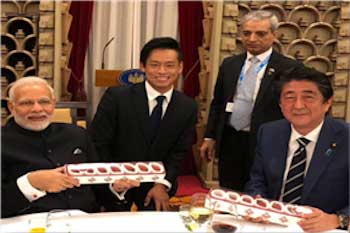 PM of India, Shri Narendra Modi and PM of Japan, Mr Shinzo Abe meeting the CEO of GRA, Inc (Implementing Organization) where the candidates trained by Lohia Corp Ltd. are undergoing training in Japan. Both PMs showcasing the Strawberry cultivated by Indian Interns.

First batch of 15 candidates trained by Confederation of Indian Industry (CII) in consortium with Nihon Technology Pvt. Ltd. in April 2018. 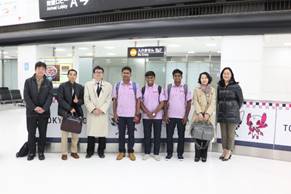 Interns from India welcomed by Supervising Organization and NAVIS NIHONGO in Japan.

A Basic Framework for Partnership for Proper Operation of the System Pertaining to Specified Skilled Worker’ was signed between India and Japan in 2021. To address the shortage of labour in Japan, a new residency status called SSW was introduced in Japan. It covers 12 sectors under which skilled workers from India who meet the skills requirements and qualify the Japanese language tests would be eligible for employment in Japan.

A total of 20 technical interns have converted to SSW after successfully completion of their TITP program. Out of which 16 are in Manufacturing, 2 in Nursing Care and 2 in Agriculture. Currently, the SSW tests for Nursing Care and Agriculture sectors have been launched in India.

a) Training for Emirates Jobs and Skills (TEJAS): To train, certify and place Indian workers in GCC Countries NSDCI launched TEJAS program in 2022. For candidate sourcing under TEJAS program, Skill India International Network Members (SII) are engaged. As on date, the confirmed demand mandate from GCC countries is approximately 3,484 across 7 sectors. So far, 10+ recruitment drives have been conducted. A total of 320 offer letters have been issued with 73 candidates deployed.

b) Kingdom of Saudi Arabia (KSA): NSDCI signed a MoU with Takamol Holding to support KSA’s Skills Verification Program (SVP) which aims at verifying that the professional workers possess the qualifications and skills required to perform the professions in which they work. Out of 17 occupations, benchmarking of 5 occupations viz. Electrician, Plumber, Electrical Automotive, Mechanical Automotive and HVAC has been undertaken.

In line with providing international opportunities to the Indian workforce, NSDC has been actively working with relevant stakeholders in the UAE. 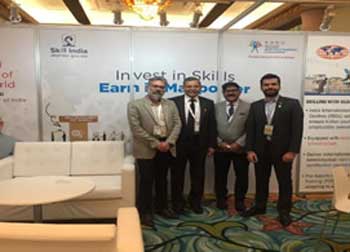 b. NSDC participated in the India – UAE Partnership Summit on 30-31st October in Dubai to showcase skilling initiatives with a focus to establish linkages with employers for hiring skilled certified workers from India. Lastly, the model for technical collaborations to deliver assessment & certification in UAE is being finalized. 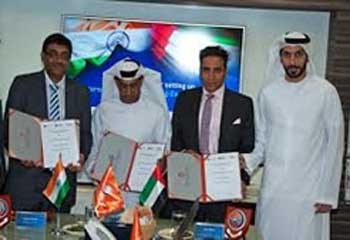 a. MoU signed with Temasek Foundation International and Singapore Polytechnic on 31st May 2018. Singapore Polytechnic (SP) with the support of grant from Temasek Foundation International (TFI) is collaborating with NSDC to strengthen the training of trainers and assessors program pertaining to short term skilling across India and develop Quality Assurance Frameworks for the performance monitoring of the Trainer and Assessor Academies. 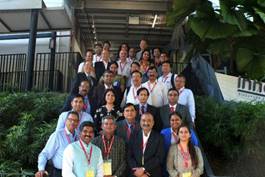 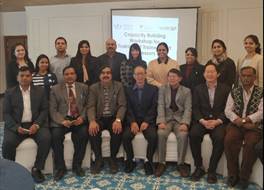 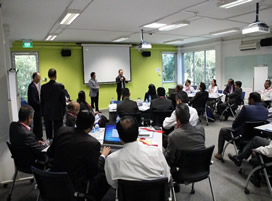 b. MoU signed between NSDC and National University of Singapore’s Institute of System Sciences (NUS-ISS) in May 2018 to collaborate in adequately skilling India’s workforce in emerging technologies such as Big Data Analytics, Artificial Intelligence and Robotics.

c. MoU signed between NSDC and Enterprise Singapore to provide Singapore companies with an opportunity to connect with investors and partners in India’s skill development ecosystem.

d. MoU signed amongst NSDC, Terra Orient Skills Academy Private Ltd. and Singapore Polytechnic in Feb 2019 for setting up of COEs for Advanced Skilling. Training of trainers has already commenced who would then be deployed in the COEs.

e. A delegation from Singapore, led by Singapore’s Minister of Education, Mr. Ong Ye Kung, visited New Delhi from 6 – 7 June 2019. A minister level meeting was organized by Ministry of Skill Development and Entrepreneurship (MSDE) on 6th June 2019 to interact with the delegation from Singapore. Objective of the visit was to understand the skills ecosystem in India and see how best Singapore could find opportunities to partner Indian skills stakeholders. Key officials from MSDE, MEA, NSDC and SSC Chairmen were in attendance. 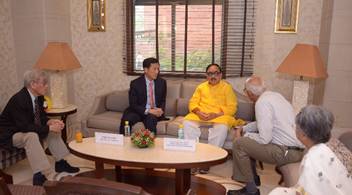 Meeting with the Singapore Delegation led by the Minister of Education, Singapore at IHC, New Delhi

A ministerial-level meeting between the Hon’ble Minister of State, Skill Development and Entrepreneurship and Hon’ble Minister of State, Ministry of Trade and Industry (MTI) and Ministry of Culture, Community and Youth (MCCY) Singapore held on 22nd February, 2022 for collaboration in skill domain was held on 22nd February 2022. 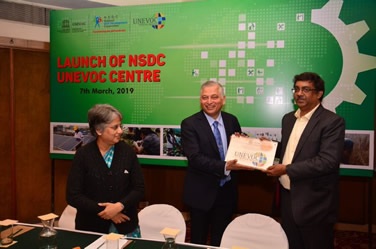 5-day international workshop on Greening of Job Roles and Curricula was organized jointly by NSDC and UNESCO-UNEVOC from 4th to 8th March 2019 in New Delhi. The workshop sought to address policy and training needs for integrating sustainability and green concepts into occupational standards and fostering an understanding on how to effective move from occupational standards to curriculum planning and design. 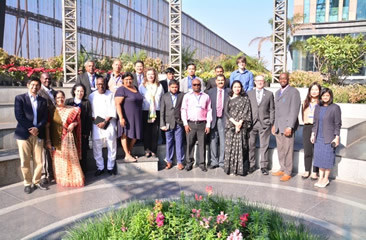 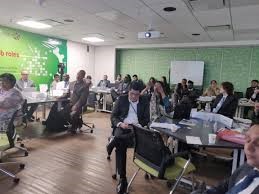 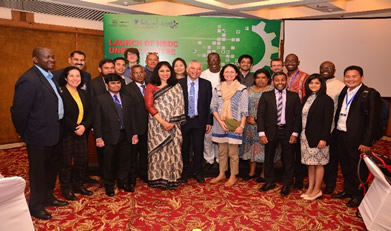 Participants of the Greening TVET workshop at the NSDC-UNEVOC Centre launch with Head, UNESCO-UNEVOC and ILO, Director, India.

a. An MoU was signed between NSDC and EDUFI (National Development Agency) on January 23, 2019 to strengthen TVET through the promotion and facilitation of knowledge exchange, new innovations and connecting providers from both sides within the vocational education and training sector.

b. An MoU was signed between NSDC and Omnia (international commercial arm of four Finnish organizations with outstanding expertise in education, training, and development cooperation) for capacity building workshops, development of entrepreneurship modules, joint certification courses for labor mobility, etc. 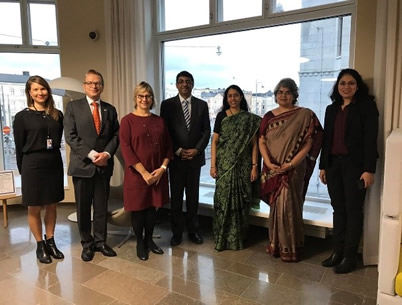 A delegation from India, led by Mr. Manish Kumar, MD&CEO, NSDC with the Ambassador of India to Finland and Estonia. 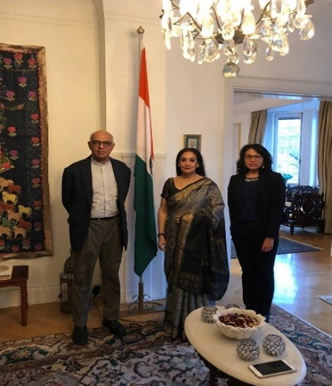 A delegation of the Ministry of Skill Development and Entrepreneurship (MSDE) represented by Hon’ble Secretary Dr K.P. Krishnan and National Skill Development Corporation (NSDC) held G2G and B2B discussions in Stockholm during their visit in November 2018. 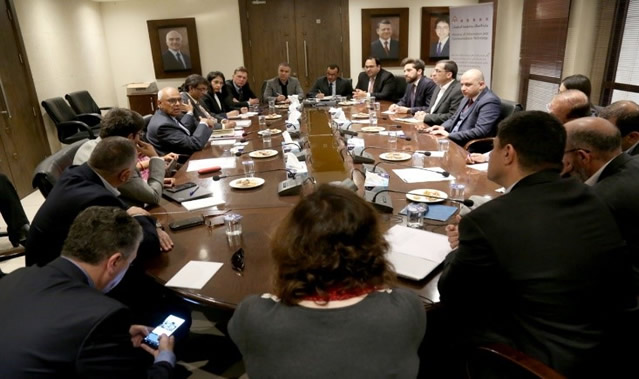 To facilitate overseas mobility of the skilled workforce, the Ministry of External Affairs (MEA), Ministry of Commerce and Industry (MoCI), Ministry of Education (MoE) and Ministry of Skill Development and Entrepreneurship (MSDE) jointly organized the first Virtual Global Skill Summit (VGSS) on 15th November 2022 with the Indian Ambassadors /High Commission representing India Missions from ten nations. The summit aimed at institutionalizing a robust mechanism for exchange of information on skill requirements of countries and the skill availability in India. 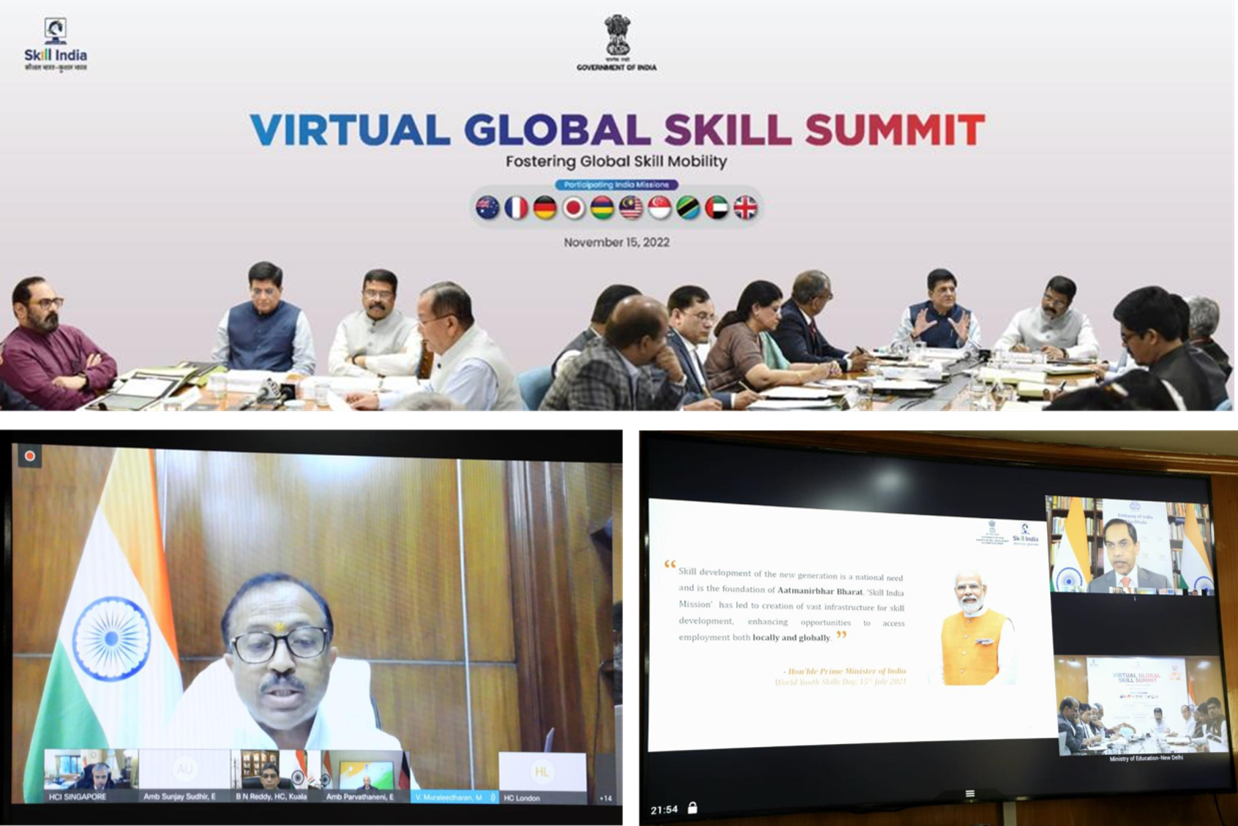